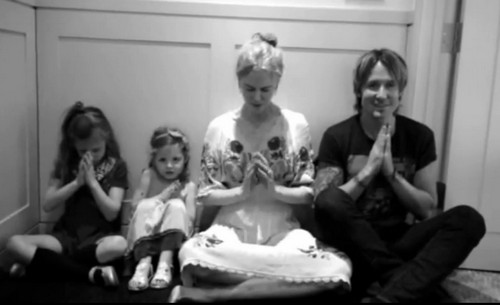 Nicole Kidman has never been one to shove her children in front of the camera. It takes an awful lot for this Hollywood mother to allow her two adorable daughters, Sunday and Faith to be purposely filmed for anything and yet she has found a worthy cause. Nicole, her daughters and hubby, Keith Urban have all joined Reba McEntire’s Pray for Peace Campaign. The family filmed a video for the outreach program and it has been uploaded to Keith’s YouTube and Facebook accounts.You can watch the video for yourself below. It is a heartfelt approach with a serious message backing it up. As for the campaign itself, Reba explains it all a bit more in a message posted on her own Facebook page saying,

“The idea to write the song “Pray For Peace” came to me last year as I was walking on our place in Gallatin, Tn. For days I’d sing, “Pray for Peace”, over and over. It wasn’t until several months later did the other parts start to fall in place. I feel this song is a gift from God. I have never worked on a song as long as this one. It went from a bass drum, fiddle and singers to guest artist singing with me, adding more instruments and even a choir and a bagpipe!”

I have to admit, it’s nice to catch a glimpse of Sunday and Faith kind of being themselves. So often if we do see them they are mid-travel and being hustled to a waiting vehicle. It’s nice to see them lending a bit of support for Pray for Peace and it’s also pretty cool that Nicole and Keith are already instilling in them a sense of obligation to lend a hand for the greater good when an opportunity arises.