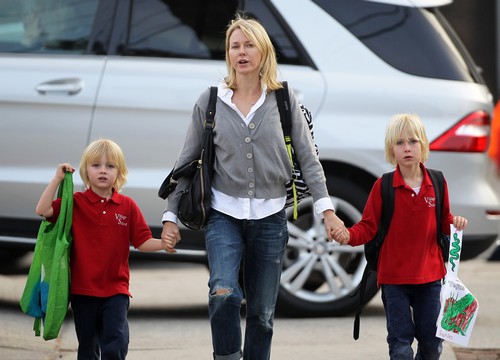 Actress Naomi Watts looks just like any other Mom as she picks up her sons five-year-old Samuel and six-year-old Alexander (Sasha) from school in Santa Monica, California yesterday [01/29/14].  Naomi was makeup free and dressed casually in a white shirt, gray cardigan and jeans.  Naomi tries to spend quality time with her boys and once revealed,  “I want [my sons] to feel connected to me and me to them. I want them, above all, to feel sure of who they are. That they are safe in the world. And, of course, connected. To their parents, their friends, their family, the world and themselves.”

The British actress has been in a relationship with Ray Donovan star Liev Schreiber since 2005 and they have two sons together.  Naomi has said she would consider a third child if she had a guarantee it would be a girl.

Meanwhile, Naomi is currently working on “While We’re Young” with Ben Stiller and Amanda Seyfried.  The movie is about an uptight documentary filmmaker and his wife find their lives loosened up a bit after befriending a free-spirited younger couple.

No date is has been released for the film being directed by Noah Baumbach but it is expected to be sometime in 2014.

Woman Gets Pregnant Thanks to Yolk from a Hen’s Egg

“Frozen” Sing-A-Long Adventure Coming to a Theater Near You