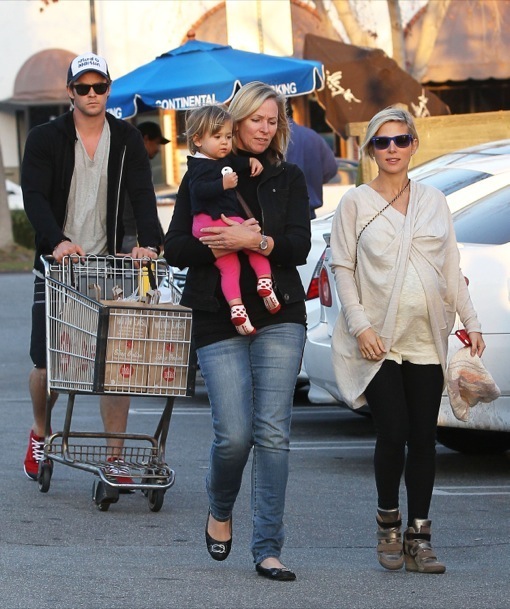 Chris Hemsworth, his wife Elsa Pataky and their daughter India were joined by his mom  while shopping for groceries at Whole Foods in Santa Monica, CA on Thursday (Jan. 9).

The Thor actor pushed a grocery cart full of bags while pregnant Pataky walked ahead with his mom.

After picking up groceries, Hemsworth and Pataky took India for a routine checkup at the doctor’s office.

The Australian-native is currently on a strict diet of consuming 500-600 calories a day to slim down for his new movie, In the Heart of the Sea.

The film is based on the true events that inspired Herman Melville to write Moby Dick.

“A bunch of sailors in a whaling ship get struck by a whale, the ship sinks and they jump onto the small rafts and drift for 90 days. Basically they begin to die and eat each other… a romantic comedy,” he joked to Jimmy Kimmel Live!. “We have to get rather skinny. So we’re on 500 or 600 calories a day.”

Filming of the movie was halted for the holidays. He is expected to continue filming in the coming months.