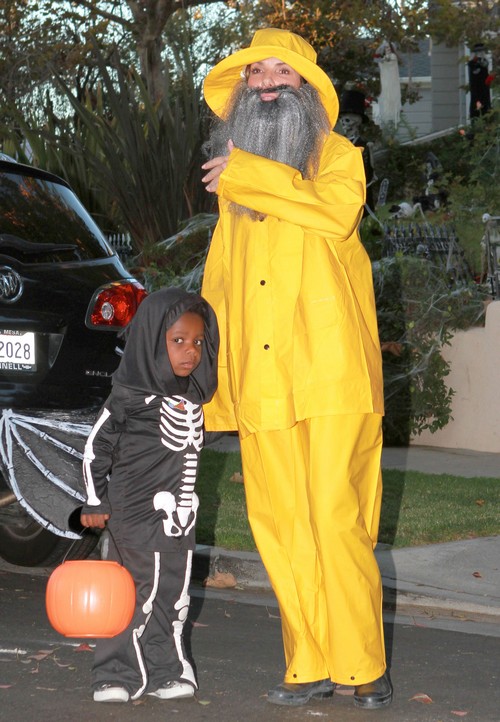 We love Halloween and Celebrities are no exception.  Yesterday “Gravity” actress Sandra Bullock took her three-year-old son Louis out trick-or-treating.  Sandra decided to go incognito in a fisherman costume with a yellow slicker, boots and a beard that disguised who she was.  Little Louis was a cute Halloween skeleton.

Joining Sandra and Louis was her The Heat co-star and new bestie Melissa McCarthy.  Melissa wore a matching costume to Sandra’s fishermen one.  It’s nice to see celebs who treat Halloween like Halloween and don’t try to wear the skimpiest costumes to get attention.  The ladies looked like they had a lot of fun. Melissa was accompanied by her family husband Ben Falcone, and her two daughters, Vivian, 5, and Georgette, 3.

Sandra and Melissa had such great chemistry on The Heat many people have speculated that there may be a reunion.  Sandra shot that rumor down by says, “I’m not doing a sequel to ‘The Heat.  I’ve done two sequels. They were horrible. What Melissa and I had was beautiful. We might do another film together. I think we should do a silent film together.”

But Sandra left a little room for speculation – when she later said, never say never, so you never know!  What do you think of Sandra and Melissa’s costumes CBLers?  Let us know your thoughts!