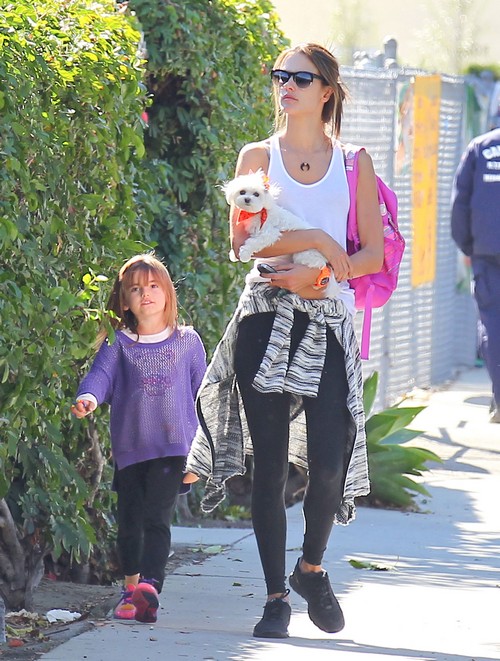 Brazilian and Victoria’s Secret model Alessandra Ambrosio stopped by to pick up her five-year-old daughter Anja up from school in Santa Monica, California on October 31, 2013.  Alessandra was dressed casually in black skinny, white tank top and her hair up in a pony tail.  Anja was wearing black tights, purple sweater and pink running shoes.  Alessandra brought a friend along with her to meet Anja.  She was holding their adorable little white dog.

Earlier in the day Alessandra was working out at an LA gym and then went shopping for some last minute Halloween tweets before she picked Anja up.  She wanted to be ready for the big night.

Neither Alessandra nor Anja were dressed for Halloween yet.  Later that day Model Mom Alessandra donned a cat mask and took Anja and her 17-month-old son Noah our trick-or-treating with her fiance since 2008, businessman Jamie Mazur.  Noah was dressed adorably as a bear and Anja was dressed as a little princess.

Rumors have been circulating lately that Alessandra and Jamie are going through a rough patch in their relationship.  But the pairs rep shot that rumor down fast saying, “It’s not true, they are still happily together.”

Good to hear, they look like an adorable family!