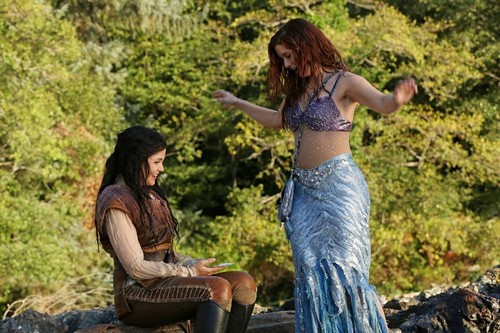 On Sunday my favorite fantasy drama Once Upon A Time returns to ABC with a new episode called, “Ariel.”  Last week’s episode was fantastic and we cannot wait until Sunday’s new episode.  Good news, we have managed to get our hands on a sneak peek video and a few spoilers to whet your appetite as you wait  for next week’s episode 6, “Ariel.”

On next week’s show after being saved by Ariel, Snow White returns the favor by helping her new friend get acquainted with Prince Wric, and Emma, Mary Maragaret, David and Hook attemp to rescue Neal from Pan’s encampment.

Official ABC synopsis of next week’s episode: On next week’s episode Back in the Fairy Tale Land that was, when Ariel (JoAnna Garcia Swisher) saves Snow White from drowning in the ocean’s depths, Snow returns the favor by helping her new friend get acquainted with Prince Eric, with whom she has fallen madly in love with. Meanwhile, Emma, Mary Margaret, David and Hook attempt to save Neal, who is imprisoned in one of Pan’s encampments, and Regina and Mr. Gold begrudgingly team up to find a way to take down Pan.

Once Upon A Time season 3 episode 6, “Ariel” airs on AMC on November 3rd, 2013. Check out the preview video below & photos of season 3 episode 5 and let us know in the comments below what you think!