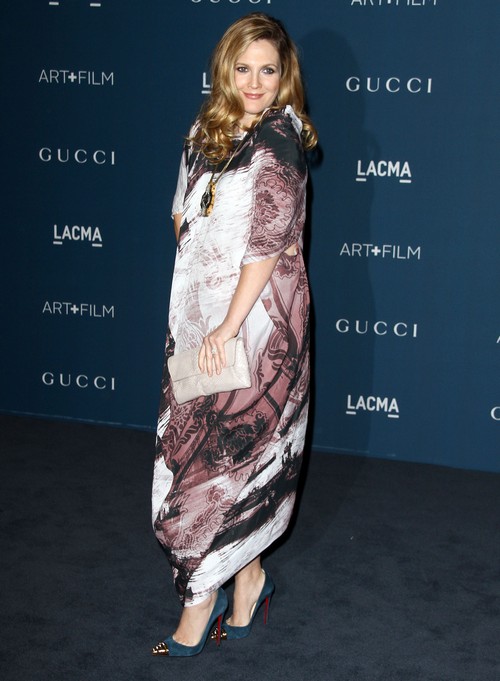 Great news today Drew Barrymore is pregnant with her second child.  This will be the second child for Drew and her husband of 17-months Will Kopelman.  Drew gave birth to her first child Olive Barrymore Kopelman on September 26, 2012.

We caught up with Drew at the LACMA 2013 Art + Film Gala Honoring Martin Scorsese And David Hockney held at The LACMA in Los Angeles, California and it certainly looked like she was hiding a baby bump.  Her face also looks rounder than usual.

So far Drew and Will’s rep have not confirmed anything, but it comes as no surprise Drew has been very verbal about not wanting Olive to be an only child.  She told Jay Leno she wanted to get pregnant again right away.  She said, “I grew up as an only child, and although that really works for some people and for some parents that’s the way they want to do it.”

Drew recently sold her mansion in Montecito, California.  The two-storey 1937 traditional home had six bedrooms, with neighbors including Ellen DeGeneres and Oprah Winfrey.  I guess Drew was already planning for her expanding family and wanted some place bigger.

A big Celeb Baby Laundry congrats to Drew and Will!