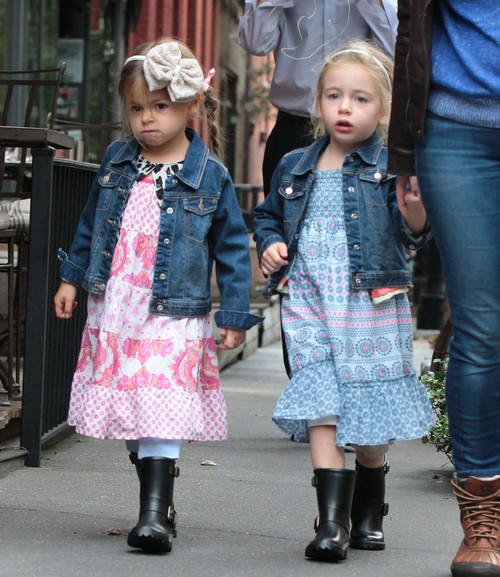 Sarah Jessica Parker and Mathew Broderick‘s adorable twin daughters Marion and Tabitha Broderick were spotted out with their nanny in New York City, New York yesterday,  October 23, 2013.  The two little fashionistas are becoming mini Carrie Bradshaws, the character their mother played on HBO’s Sex and the city for six seasons and two movies.

With the weather becoming colder and wetter in New York, the four-year-old cuties were Boho chic, wearing matching black boots, print dresses, jean jackets and fashionable head bands.  The two are certainly having fun with their outfits this fall

Meanwhile, Mom Sarah  has hit the stage in the new play with Blythe Danner called The Commons of Pensacola, playing  at Manhattan Theatre Club’s Stage I in NYC, with an opening night scheduled for Nov. 21.

Directed by Lynne Meadow, The Commons of Pensacola centers on Judith (Danner), a woman who has been divested of her assets and forced to leave her luxurious New York life after her husband’s Wall Street scam became headline news.