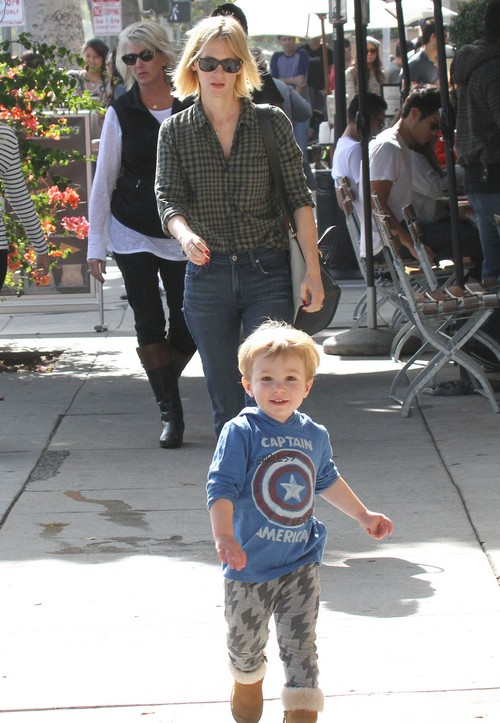 Mad Men actress January Jones stepped out with her son Xander for lunch with friends in West Hollywood, California today, October 26, 2013.  35-year-old January certainly spends a lot of quality time with her son.

Xander looked comfortable in grey print jogging pants, a blue Captain America t-shirt and UGG boots.  January was casual in skinny jeans, print shirt, running shoes and the mandatory dark movie star shades.   January let Xander run around a bit but where he started to look tired she decided the best thing to do was to pick him up.

Meanwhile, January has refused to divulge who Xander’s father is, since Xander’s birth the tabs have been speculating who it might be, but January is not telling.  “It’s just not something the public needs to know.  I don’t divulge my sexual preferences. There are parts of your life — no matter what your job — that should remain private.”

January’s role as Betty Draper will be coming to an end in 2015.  AMC announced the show is splitting their final season into two part with the final part airing in 2015.  AMC president Charlie Collier explained why they have decided to split the final season into two parts he said, “This approach has worked well for many programs across multiple networks, and, most recently for us, with Breaking Bad, which attracted nearly double the number of viewers to its second-half premiere than had watched any previous episode.”