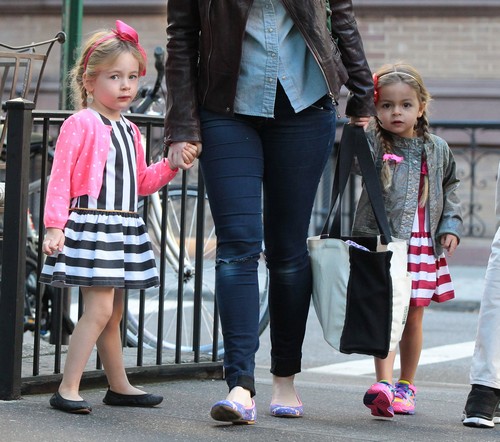 Sex and the City star Sarah Jessica Parker and Matthew Broderick‘s twin daughter’s four-year-old, Marion and Tabitha Broderick are following in their Moms fashionable footsteps.  The girls were spotted yesterday [September 25, 2013] on their way home from school in New York City looking like two little fashionistas.

The twins looked incredibly cute wearing matching striped dresses in different colors as they strolled home with their nanny.  Not only were they cute in stripes, they were both sporting adorable headwear too.

Sarah has said that the girls pick out their own clothes she does not help them. “We just give them the temperature outside and if they don’t pick enough clothing, then we say, ‘You need leggings or pants. You need to add something so you’ll be warm enough.’ That’s all they listen to.”

It looks like the twins are mini Carrie Bradshaws with their fashion sense!  All together now, ahhhhhh…