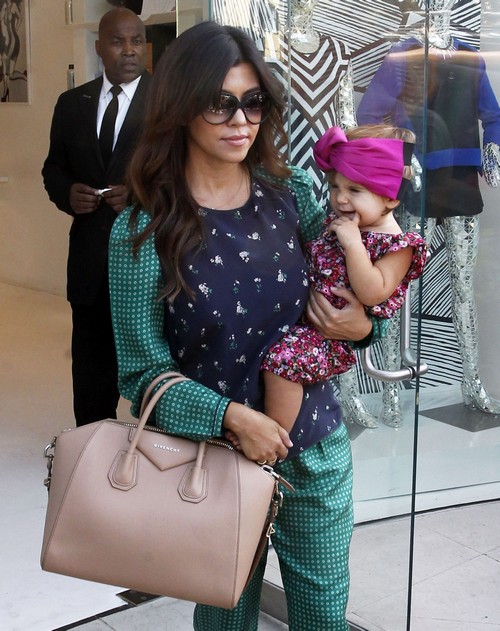 “Keeping Up with the Kardashians” star Kourtney Kardashian and her adorable toddler Penelope dropped in at their DASH store on September 25, 2013 in West Hollywood, California.  Penelope was sporting some interesting headgear, a pink turban and wearing a flowered onesie.  It looks like mommy Kourtney is already grooming Penelope to be a little fashionista.

Along for the outing was one-year-old Penelope’s aunt Khloe Kardashian.  Khloe was looking somewhat forlorn, probably because of the problems she is having with her husband Lamar.  It is nice to see Khloe get a break from all the craziness surrounding her and and Lamar and get some downtime with her niece.

Meanwhile rumors are still circulating that Kourtney is pregnant again with her boyfriend Scott Disick.  In the photo above where Kourtney is wearing a green and blue patterned long sleeved top and matching pants fans think she is hiding her new bump.

Kourtney has been very verbal about wanting more children and has admitted she is not using birth control.  According to sources, since the birth of big sister Kim Kardashian‘s daughter North West Kourney is said to want a another girl.  The source revealed, “Penelope is still her little baby, but when she held Nori, she truly realized how much she had grown. Now she’s craving to have another little girl.”

So what do you think CBLers, is Kourtney pregnant with baby # 3 or is this groundless speculation.  Hit the comments and let us know your thoughts!

Pink: “I Have the Most Beautiful Baby That Was Ever Born!”