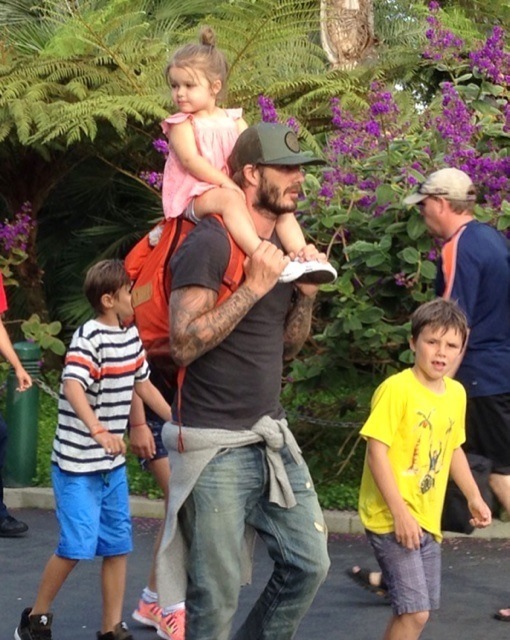 David Beckham enjoyed a day with his children, Romeo, Cruz, Brooklyn and Harper at Legoland in Carlsbad, CA on Tuesday (August 6).

The retired football player dressed casually in a black t-shirt, and faded jeans while carrying the 2-year-old on his shoulders. The three boys walked with some friends who had joined them for a their day of fun.

David has reportedly been offered a role in The Secret Service, a spy thriller from Kick-Ass and X-Men: First Class director Matthew Vaughn.

The film will star Colin Firth as a secret agent who joins forces with a punky young upstart played by newcomer Taron Egerton. Samuel L Jackson has been cast as the film’s villain and Michael Caine will appear as the head of a spy organisation.

“Becks was asked by Colin Firth if he’d like to be in the movie but he is yet to fully commit,” a source told The Sun. “He loves movies and fancies appearing on the big screen – but just as a one-off, not a full-time career.”