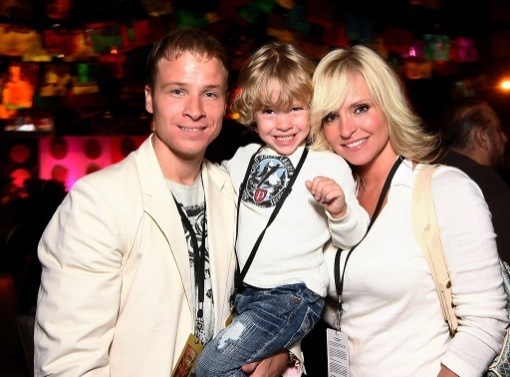 Brian Littrell‘s son Baylee is following in his dads footsteps.

The 10-year-old got a taste of what his does for a living, by taking the stage to perform solo at the Backstreet Boys concert in Montreal, QC on Tuesday (August 6).

Wearing a Montreal Canadiens hockey jersey, Baylee looked like the spitting image of his dad. He performed two songs, Fantasy by Mariah Carey and I Want You Back by Jackson 5.

After the youngster performed, his proud dad ran onstage and gave him a huge hug. Brian then thanked the fans for supporting his family and then ran off the stage where his wife Leighanne was waiting for him and Baylee. They shared a family hug before going backstage.

Bailey also performed onstage the night before in Toledo, OH. Before the show, Brian hinted his son would be performing in the bands upcoming shows.

“So Baylee made the lineup tonight…. So proud of my CHAMP…..”, the Backstreet Boys singer captioned a shot of the concert setlist via Instagram.