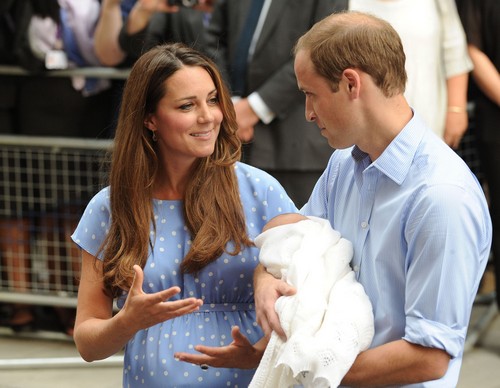 Kate Middleton recently gave birth to her first child, a son, George with her husband Prince William.  The new little tot is Prince George and everyone is expecting him to be raised in a Royal manner.  However insiders are saying that Kate and William intend on raising their son the same way William’s mother Princess Diana raised him and his brother.  The little prince will be raised with a good balance between a Royal life and a personal life.  The Royal couple will try to make George’s life as normal as possible.

“It’ll be a carbon copy of how William and Harry were brought up, because of their mother,” a friend tells PEOPLE. “However she’s painted, her greatest legacy is her sons. The way they’ve been brought up and the way she taught them to think for themselves and to lead a normal life.”

Princess Diana brought up William and Harry much differently that Charles was brought up.  Many believe that Kate and Diana have a lot of similarities.  They both, “adored children of all ages, and understood exactly how to get into a child’s mind.”  A source reports, “Having seen her interact with children  … and [overhearing] the conversations that she’s had, she’s just so natural. She has a rapport with children.”

Meanwhile George’s grandfather Prince Charles has already come up with a nickname for the little guy.  Good thing, George is a bit staid for a little boy, so Charles and Camila will be calling their new grandson Georgie… all together now….. ahhhh….

Sarah Michelle Gellar: My Daughter Thinks I Get My Hair Done For a Living!