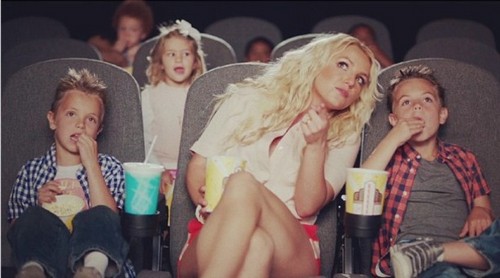 Britney Spears has posted an adorable shot of herself with her two sons; Jayden and Sean, from the set of her new music video. The singer, who recently wrapped filming the visual for her latest single Ooh La La uploaded a picture of her watching a screening of The Smurfs 2.

According to reports, her sons will be making a cameo in the video, though it’s unclear whether or not they’ll do anything other than eat popcorn in their scenes. LOLz. Britney definitely seemed excited when captioning the photo on Instagram saying: “Omg. How CUTE are my boys?! Video premieres Thursday on VEVO at noon ET!”

Yes, Britney – those kids are adorable and it seems like it was just yesterday they were still babies. As the singer stated in the caption, the video will premiere on VEVO later this week, but what was failed to mention is the “surprise” that fans should look out for when they see the video.

The soundtrack for the kids film may even appear on BritBrit’s forthcoming album which she’s expected to release later this year.   If we were to believe sources that say she’s working on a Pop/Hip-Hop album, the Ooh La La track certainly wouldn’t fit anywhere on the record.

Britney hasn’t given anything away yet, unless she’s referring to her boys as the surprise? Who knows, we guess we just have to wait another day to find out what this big secret Britney is hiding from us, but we’re certain it’s going to be the cameos from Jayden and Sean. Awww, they’re so adorable, don’t you think?