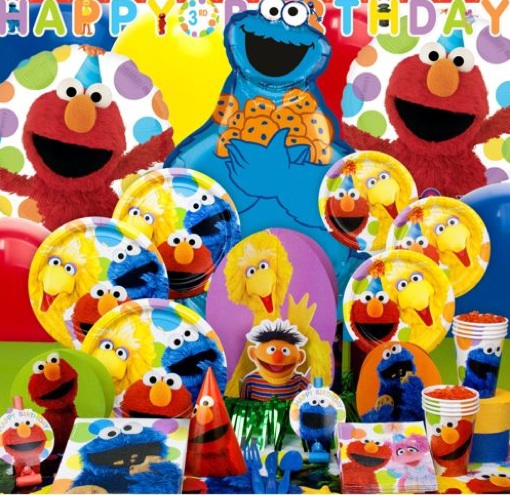 Is there any more agreed upon statement by parents than, “Where did time g0?”. I honestly feel like I gave birth yesterday. My baby girl, Ava is already turning two on July 11th!

Last year, I went all out for Ava’s birthday. I threw her a cupcake themed party complete with cupcake balloons, matching flowers, a 2 foot cupcake cake with a cartoon like character of her and cupcakes for guests to take home. She even wore a cupcake dress! Some parents may feel like it was silly to throw a huge party for her, but I am a total planner. I love planning, so when I get the chance to plan something it’s going to be good! And to be fair I didn’t realized the cake was going to be that huge. I blame it on the cake decorator! (I have attached a photo collage from her party last year.)

Now that her birthday is rolling around again, I am in midst of planning a new party. The theme of the party is going to be Sesame Street because Ava absolutely loves EVERYTHING about the show. She knows the name of all the characters and loves singing ABC with Elmo on Youtube.

Between being a stay-at-home mom and a full-time blogger I don’t have the time to do crafting. I love the idea of making my own decorations, but I just don’t think it is doable in my current situation. Therefore, I have opted for a pre-made Sesame Street decoration set from an online party store.

I love a deal, so I looked for a party store on Ebates and then looked for an additional discount on RetailMeNot.

This is what I bought – An ultimate 8 person party set that comes with the decorations, plates, napkins and utensils at Birthday in a Box. I viewed a couple of sets, but I found this one was perfect because it added more decorations rather than accessories like thank you notes and party blowers which I do not need. I will have more than 8 people at the party, so I bought additional plates and napkins. In the end, this came out cheaper than a 16 person party set at other online party store. The store also gave me a free personalized birthday banner because of an ongoing promo.

I bought a few other decorations too. I fell in love with a life-sized Elmo helium ballon (picture below). I think Ava will absolutely get a kick out of it as she love Elmo and balloons!

The next obvious thing to do after buying the decoration is planning a birthday cake. Like last year, I am going to get a personal cake made for her. I searched through Sesame Street cakes in Google images and have decided on a cake similar to this one. I like that this cake is not too big, but still two tiers. It has a couple of Sesame Street characters too. The only thing I really don’t like is the lack of decoration on the top of the cake, so I have asked my cake designer to add a character at the top with some decorations.

I am also ordering Sesame street cupcakes. It is really unbelievable how creative cupcake makers can get! I love these cupcakes.

So, the only thing left  to plan is the actual food for the party. Last year, we ordered a small sandwich platter, a huge salad bowl and mini spring rolls from a local food company. Unfortunately, they closed during the year, so I have no clue what to do. I prefer not to make anything because of the mess and I don’t want to be in the kitchen preparing food during the birthday party.