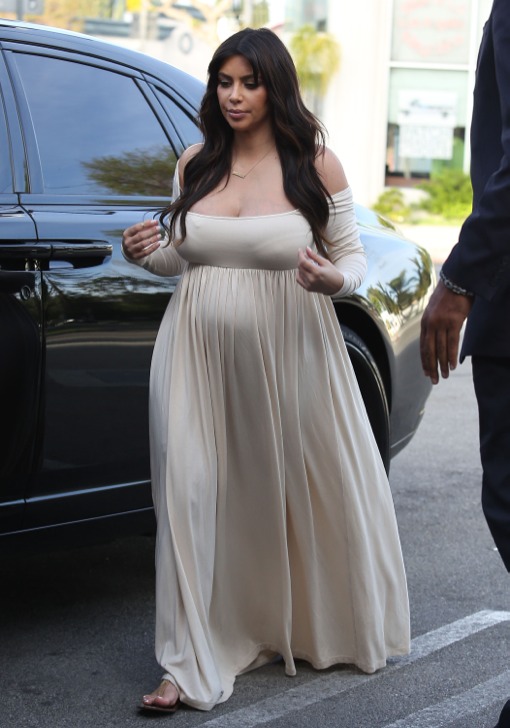 Fresh off a Parisian weekend getaway, Kim Kardashian was pictured stopping by SweetHarts with friends to enjoy a frozen yogurt in Sherman Oaks, CA on Wednesday (April 3).

The pregnant reality star wore a flowing cream dress that emphasized her new ‘curves’ as she satisfied her pregnancy craving with a sweet treat.

Kim laughed and giggled with friends while the paparazzi happily snapped her picture.

According to  In Touch, Kim is indulging in high-calorie, carbohydrate-heavy meals including creamy risotto, chicken and waffles, decadent desserts and more.

“She’s hungry all the time and getting bigger and bigger,” a close friend adds. “She hasn’t just gained 20 pounds like she claims. She’d already gained 45 to 50 when she still had four months to go! This is a time when she needs Kanye the most, and he’s not there.”

Media outlets are also reporting that Kim and boyfriend Kanye West have called it quits despite spending the weekend in Paris together.

Do you believe the rumors? Are people being too hard on Kim?

Family Fun: A Trip To The Monterey Bay Aquarium Day 2