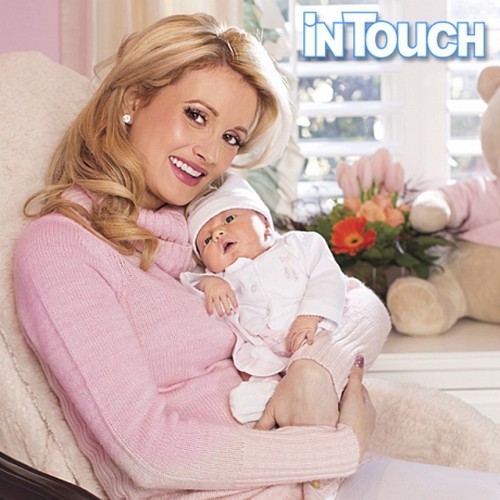 Reality star Holly Madison gave birth to her daughter Rainbow Aurora just 7 days ago.  Holly and her boyfriend Pasquale Rotella welcomed their daughter who weighed in at 7-pound, 2-ounces on March 5th, 2013.  Holly has given an exclusive interview to InTouch Magazine.

“Just holding her is so much fun,” Holly gushes in the new issue of In Touch. “Even the delivery was easy — I was actually laughing as I was pushing!”  WOW, that was an easy birth, I was not not laughing as my daughter Ava was born.  There was a lot of yelling going on, but not laughing.

Holly is so thrilled at being a Mom she does not want to stop there.  Holly told the magazine she would love to have more children and is already getting started again.  Six children would make her very happy!

To read more of Holly’s interview with In Touch magazine, pick up a copy of the magazine, on stands now!