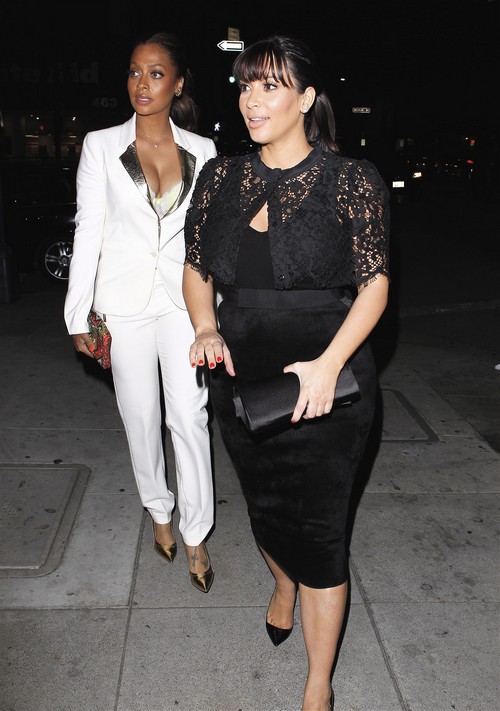 Pregnant Keeping Up With The Karadshian star Kim Kardashian took some time out from her schedule to spend some quality time with friends.  Kim, her baby bump and her friend fellow reality star LaLa Vasquez  headed to have dinner Crustacean on March 19, 2013 in Beverly Hills, California and we have the photos for you.

Kim was all dressed up for the evening in a pencil thin black velvet skirt, black cami and a black lace shrug.  LaLa opted for a white suit and bustier.

Kim has been advised by doctors to take it easy.  She has been jetting around the world and she became ill on a flight, she was afraid she was suffering a miscarriage.  The baby was found to be healthy, but Kim decided to take a few days off just in case.

Rumor has it that her upcoming divorce trial is causing her a lot a stress.  She is also stressed because she wants the marriage over so she can marry her baby’s daddy Kanye West.

Kim is so frantic to tie her man Kanye down, there were rumors last week that the two had a commitment ceremony in Turks and Caicos surrounded by a small group of friends and family.

On May 6,2013 Kim will finally see her case come to trial, 19 months after she filed for divorce.  Should be interesting, I don’t think Kris Humphries is going down without a fight!