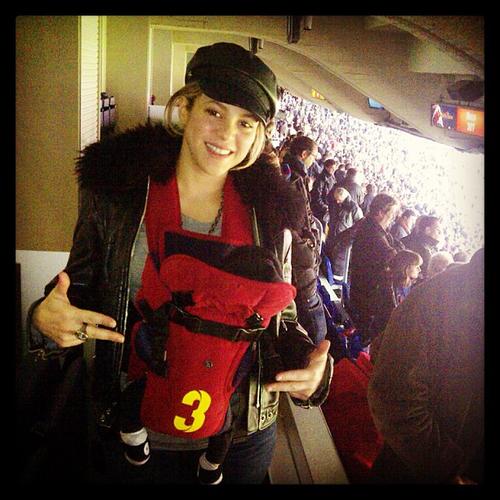 Shakira and her fiance Gerard Pique already have a football fan on their hands!

The singer took to her Facebook page  to share a picture of her and Milan cheering Pique on while he played a league match with his team FC Barcelona.

In the picture, Shakira baby wears the 3-week-old baby in a red carrier with Pique’s number 3 printed in the middle.

“His first official time going out, in Camp Nou and watches his daddy score!” the proud new mom captioned the shot.

The couple welcomed Milan in January.

“We are happy to announce the birth of Milan Piqué Mebarak, son of Shakira Mebarak and Gerard Piqué, born Jan. 22nd at 9:36 p.m., in Barcelona, Spain,” they announced on Shakira’s website. “The name Milan (pronounced MEE-lahn), means dear, loving and gracious in Slavic; in Ancient Roman, eager and laborious; and in Sanskrit, unification. Just like his father, baby Milan became a member of FC Barcelona at birth.”