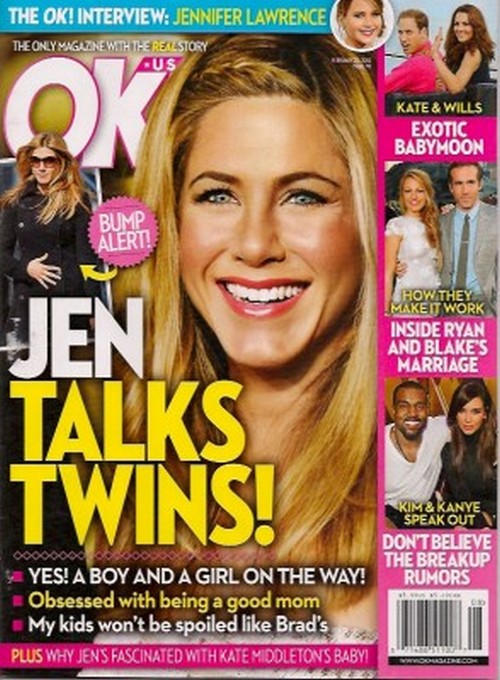 We’ve been hearing for years all about Jennifer Aniston’s desperation to have a baby. She wanted tons of them while married to Brad Pitt ans swore after her marriage crashed and burned that she’d have them without him. Headlines have jumped off the weekly mags proclaiming that Jen will be a mom when she’s good and ready. If OK Magazine is to be believed then that time is now. According to a source close to thew actress, she’s not only pregnant, but supposedly carrying twins- a girl and a boy! Says the source,

“With the support of fiancé Justin Theroux, a contented Jen Aniston is ready to become the best mom ever.  Jen’s feeling giddy with excitement right now, dying to tell the world her amazing news.”

Is it really baby time for Jen and Justin? The couple has been engaged since last summer and has been rumored to have been quietly making wedding plans which as of now still appear to be top secret. Do you think Jen really will do things out of order and opt to have her babies before actually marrying Justin?  Maybe her biological clock is ticking loudly and Jen is realizing that if she doesn’t hurry up there may not really be a chance of conceiving and carrying babies the god old fashion way!

Do you think Jen and Justin just decided to leave things to chance and now they’re being blessed with not one but two bundles of joy? Or do you think that OK has it all wrong and that once again a news outlet is reporting a pregnancy that is a complete fabrication?  Are you hoping that Jen gets a shot at motherhood? Tell us your thoughts in the comments below!