Chris Pratt: Life Has Been Really Amazing Since Welcoming Jack 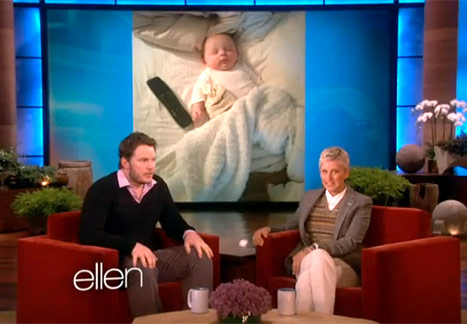 While appearing on The Ellen DeGeneres Show on Tuesday (Jan. 22), Chris Pratt opened up about what life’s been like since welcoming son Jack with wife, Anna Faris in August.

“It’s been really amazing,” the Parks and Recreation actor said. “You know, Anna and I both lead very fortunate lives. We’re both actors. We’ve been able to do really cool things, meet neat people and go cool places. . . So there’s not that much left that really excites you, where you’re like, ‘Wow, I can’t believe that.'”

The new dad enjoys watching his son experience things for the first time.

Pratt who is promoting his Oscar-nominated movie Zero Dark Thirty brought along a picture of his 5-month-old baby boy “passed out in front of the TV” and a video that showed Jack sucking on a lemon.