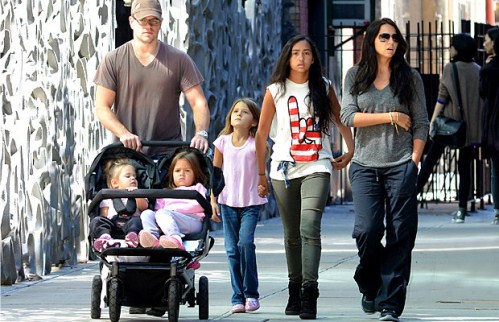 Matt Damon has come a very long way since his first role in Good Will Hunting. Since Damon’s career starting role, he became an internationally recognized film star, philanthropist, and father of four girls – Alexia, 14, Isabella, 6, Gia, 4, and Stella, 2 – who cannot wait for Christmas celebrations. Matt and his lovely wife, Luciana, blend the Christmas traditions of both their heritages. According to Matt, “We do the Latin American Christmas Eve gift opening and we do the American Christmas morning gift opening. We have this weird fusion for Christmas, but I think it just means more gifts for the kids, so they’re into it.”

Matt stars in the upcoming film Promised Land, described on IMDB.com as follows:

Corporate salesman Steve Butler (Damon) arrives in a rural town with his sales partner, Sue Thomason (Frances McDormand). With the town having been hit hard by the economic decline of recent years, the two outsiders see the local citizens as likely to accept their company’s offer, for drilling rights to their properties, as much-needed relief. What seems like an easy job for the duo becomes complicated by the objection of a respected schoolteacher (Hal Holbrook) with support from a grassroots campaign led by another man (John Krasinski) who counters Steve both personally and professionally.

Aside from the mixing of Christmas traditions, Matt wants to stay on the DL as long as possibly with his family. He told People magazine, “I’m just going to hang out with my kids. We’ve been on the Promised Land train a little bit for the last week or so, and we’re looking forward to just settling down.”

Hopefully Matt gets a chance to rest and relax before the 365 days of 2013 hit him like a brick house. We assume it’s quite the juggling act to be a world famous actor and  a father of four daughters!

Breakfast on the Go-Go!