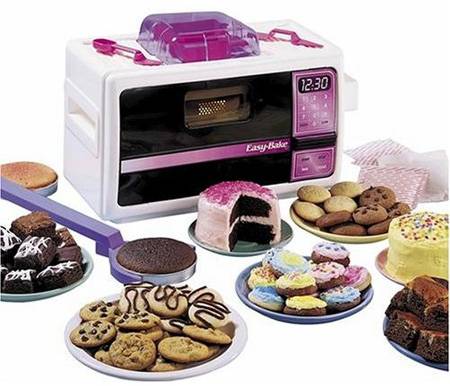 Throughout its 50-year history, the Easy-Bake Oven – a toy that allows young girls (and now boys) to bake treats under an incandescent light bulb – has only been marketed for girls. However, starting in 2013, the Easy-Bake Oven will now also feature the boy demographic in its marketing material. Mckenna Pope, a 13-year-old girl from New Jersey, drew up a petition on change.org and received over 44 000 signatures from people of all walks of life, including signatures from celebrity chefs Bobby Flay and “Top Chef” star Manuel Trevino. Pope revealed that her four-year-old brother, Gavyn Boscio, loves baking but hates playing with a predominantly “girl toy”, so this forced her to approach toy making company Hasbro with the petition.

It paid off in the end, because Hasbro will now release a silver and black Easy-Bake Oven in 2013 featuring boys and girls on both the marketing material and the packaging. This gender neutral version will also be sold alongside the current purple-themed Easy-Bake.  According to Hasbro, “Given the widespread interest in McKenna Pope’s story the company invited the Pope family to get a first viewing of the new model. Consumers can look forward to it becoming available in fall of 2013.” In fact, interest in Pope’s petition was so widespread that Hasbro has been working on a gender neutral version for the past 18 months. It will officially debut at the New York City Toy Fair in February of 2013.

Easy-Bake Ovens were first released in 1963 and have been introduced to the public in teal, yellow, green, and pink throughout the 50-year history of the toy. This will be the first time, however, that the Easy-Bake will not only take on a brand new look, but will also be directly aimed at both gender demographics.

Megan Fox’s Terrible Pregnancy: I Thought I Was Carrying A Vampire Baby