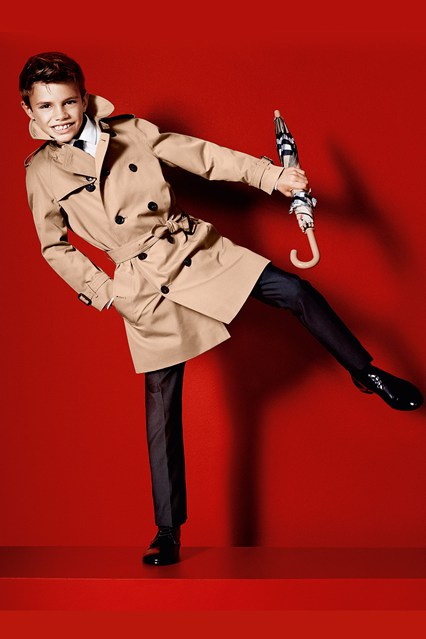 When your mom is know for her style sense and your soccer star dad for his good looks it is no wonder you would take an interest in modeling!

David and Victoria Beckham‘s 10-year-old son, Romeo, has made his modeling debut in the Burberry Spring/Summer 2013 campaign. In campaign, the stylish youngster playfully poses for the camera while wearing a Burberry trench coat, dress pants and shoes.

In a 2010 interview, while talking about her children personalities,Victoria confirmed Romeo’s love of fashion.

“I mean, you’ve got Brooklyn, who is a real boy. He’s turning into a teenager. It takes him quite some time to do his hair in the morning before he goes to school,” she said. “Then we got Romeo, who loves fashion. He likes to go out in a suit with a bowler hat . . . and he’s a real fashion lover. And then Cruz just wants to break dance every opportunity he gets.”

Romeo is not the first celebrity kid to be featured in a modeling campaign. Dannielynn Birkhead is set to be featured in the Spring collection of Guess. While Cindy Crawford’s daughter Kaia modeled for Versace earlier in the year.