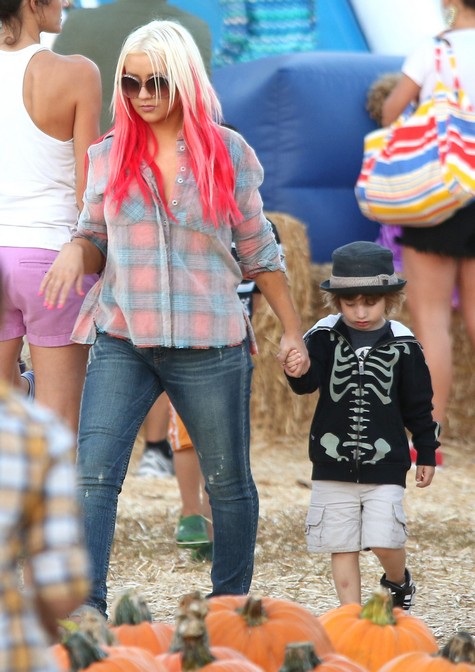 The Voice judge Christina Aguilera showed off her new ombre pink and blond hair as she and her boyfriend Matthew Rutler took her four-year-old son Max Bratman to the Mr. Bones Pumpkin Patch in West Hollywood, California on October 14, 2012.

The trio were getting ready for Halloween in the time honored traditional way and they took their job serious as Matthew pulled the cart and Max and Christina, 31,  searched for the perfect pumpkin.

Christina opted to dress casually in jeans, a baggy plaid shirt and the mandatory Hollywood huge shades.  It is nice to see her not strutting around in tight spandex clothes and breast pouring out.  Max looked adorable is his shorts and black skeleton t-shirt.  Max is the image of his father Jordan Bratman.   Christina is one of many celebs spotted at Mr. Bones which has become the hottest place to see showbiz celebs.

Meanwhile Christina‘s highly anticipated album, ‘Lotus,’ hits shelves Nov. 13.  The album will have 18 tracks and will feature some tracks with her fellow Voice judges.  The track list for her new album was released last week.  For her new Lotus album Christina posed naked for the cover.

I am not really loving Christina’s Halloween hair, if she was 16, sure, but she is far from a teenager.  What do you think of Christina’s new hair color?  Hit the comments and let us know your thoughts!

Roselyn Sanchez Takes Her Cutie Pie To The Pumpkin Patch