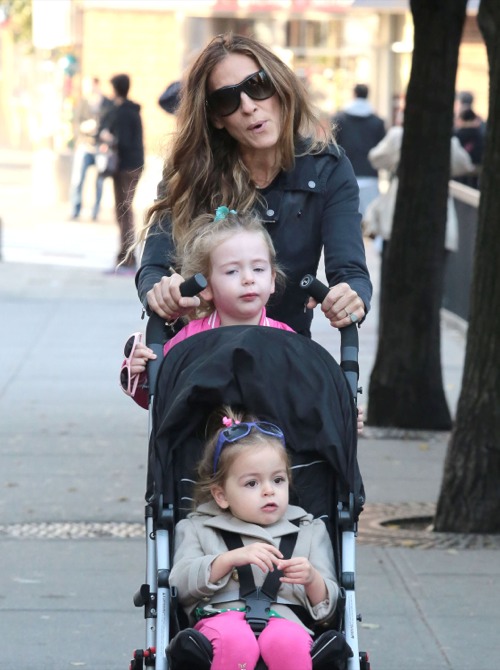 The Sex and the City star pulled double duty, taking both James and her twins to school in New York City on Tuesday.

She first headed out to take James to school at an early hour. James who turns 10-year-old next week didn’t look tired at all and enthusiastically rode his scooter to school.

After dropping off her son, Parker rushed home to pick up her 3-year-old twins Marion and Tabitha who needed to be taken to pre-pre school. Joined by a nanny, the mom pushed Tabitha in a Cybex stroller while Marion rode on the back.

The actress campaigned for President Obama in Cincinnati on Saturday. On a break, she was spotted shopping at Sloane Boutique in Over-the-Rhine, OH.

“Sarah was so nice and so pleasant to be around,” the boutique’s owner told People. “Very humble and very down-to-earth.”

The I Don’t Know How She Does It actress tried on Veda leather jackets and bought some bracelets for her twin daughters, Loretta and Tabitha.

“She told me she couldn’t wait to come back and shop again,” the boutique owner added.