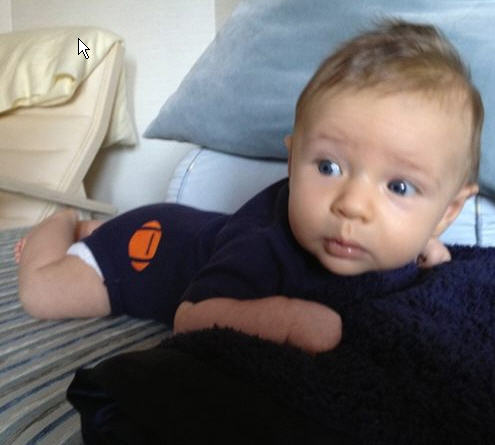 Camden is already a sports fan!

On Monday, Kristin Cavallari tweeted a new picture of her 2-month-old son Camden on Twitter. The baby looked adorable wearing a Chicago Bears bodysuit to support his dad, Jay Cutler who is the teams quarterback.

“Cam is ready for daddy’s game,” the reality star captioned the photo.

At the Bing It On Halloween Costume Challenge in New York, Cavallari told fans she’s planning a low-key Halloween at home with her family in Chicago.

“Jay has to work so we’re just going to stay home and give candy to the trick-or-treaters,” she said.

Even though she’s not planning on dressing up this year, she’s excited about her animal costume for her little man.

“We’re dressing him up as a lion because he’s a Leo,” she added.

Do you dress up with kids for Halloween?