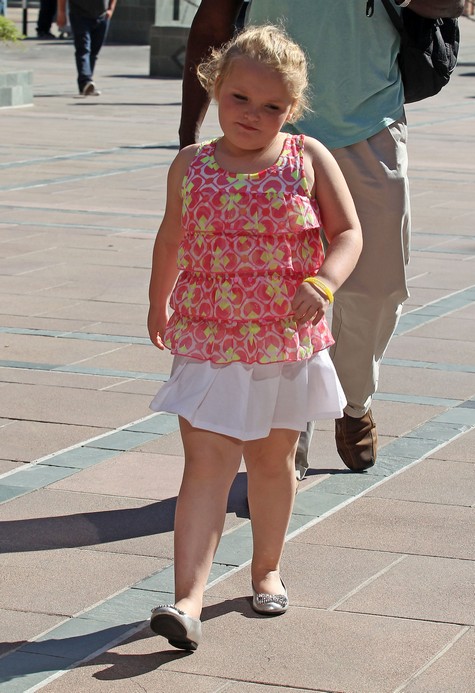 Honey Boo Boo might be wrestling soon. No, not wrestling in a crib, wrestling with professional wrestlers! TMZ reports that the super famous seven-year-old Alana Thompson received an offer to train with a pro wrestling company and TNA superstar Robbie E. What will happen to June Shannon, Honey Boo Boo’s mama? Well, we doubt any wrestlers would like to go up against her.

Honey Boo Boo and her family of funny fame whores are massive wrestling fans. This past month, the Thompsons “got into the ring at a local wrestling event in Alabama, and even took part in the match.” James Pittaro, the owner and CEO of D2W Pro Wrestling Academy in New Jersey, told TMZ that he “wants to make Honey Boo Boo’s wrestling aspirations legit, by turning her into a fully-trained killing machine.” The Expendables might have met their match, so watch out Sylvester Stallone and Chuck Norris, Honey Boo Boo gon’ beat yo face!

Pittaro is very serious about the offer, because wrestling is no laughing matter, yo! He’s willing to fly Honey Boo Boo and any member of her family out to his training facility and provide hotel accommodations. Uh-oh! It looks like Honey Boo Boo might be giving a fake throw down to a wrestler with a more kitsch name than Bruce Jenner’s. Should we be scared? Should we run for the hills? Will June Shannon approve? Gasp!

Honey Boo Boo rose to fame through the TLC sleeper hit, Toddlers and Tiaras. The little one received her own spin-off show on TLC called “Here Comes Honey Boo Boo!” The show has since the premiere garnered some of the highest ratings in the history of the network. Honey Boo Boo is a super star made in reality television heaven, so a wrestling title to her name won’t be too awkward! What do you think? Let us know in the comments below.