Colin Farrell On Fatherhood: “I Don’t Know What I’m Doing, And That’s A Very Liberating Thing!” 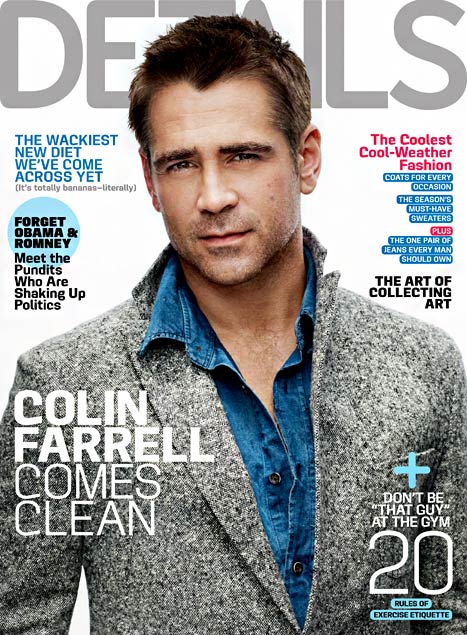 In the issue, the actor opens up in a very honest interview about his children, relationships and struggle to get sober.

The father of two boys, James and Henry admits he doesn’t have being a father all planned out and he likes it that way.

”Not knowing what the f-ck I’m doing as a dad is huge. I don’t know what I’m doing, and that’s a very liberating thing. You just go, ‘Oh look, there’s sh-t on the floor.’ There’s actually sh-t on the floor — I have a picture of it on my phone. So what do you do? You clean it up, put a diaper on his ass, and that’s that,” He says of raising kids. “It’s just about being present for these guys.”

Farrell admits when he had his first child, James he was convinced he didn’t need to get sober and could just be a friend to his son.

“When I had James, I made a decision not to change. I literally said, ‘I’m not changing! I’m gonna be his friend!’ Like a f-cking 28-year-old drug-addicted drunk friend is exactly what my 6-week-old son needs.” Finally, he entered rehab in 2006 and solved his problems for once and all. “Honestly,” he says, “I’ve got eight hours a day now that I didn’t have before, when I was drinking every day for 18 years.”

The actor who is in the process of promoting his new movie, Seven Psychopaths says his last relationship was with Henry’s mom and is determined to be a better partner if he ever gets involved again.

“I haven’t been in a relationship in a while. [It’s been] two and a half years since I was with Henry’s  mother. If I ever do get involved with somebody again, I will try as much as possible to shut my f-cking mouth and stay f-cking present. Love in action, man! Not love in f-cking words.”

What do you think of Farrell’s interview? Do you think he has left his bad boy ways behind?