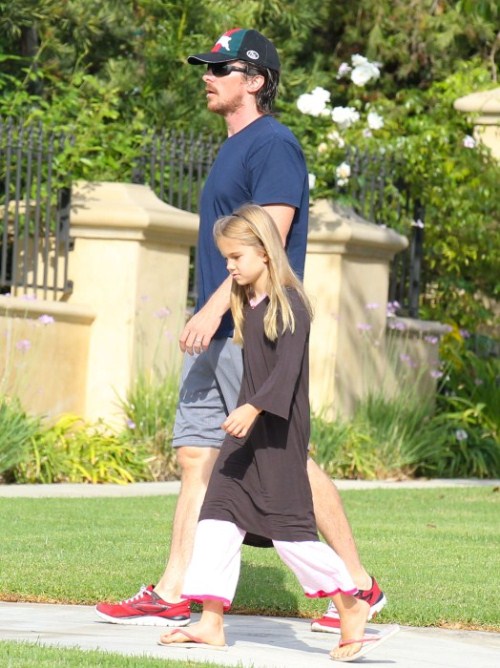 Christian Bale and his wife Sibi Blazic were spotted taking their daughter Emmaline to a birthday party in Brentwood, Ca on Saturday. The Dark Knight Rises actor tried to go nondescript in casual clothes and dark sunglasses with a blue a blue baseball cap. His 6-year-old daughter walked next to him in an over-sized brown shirt paired with pink ankle pants and sandals.

In September, the actor became a real hero after taking a young leukemia patient, Jayden Barber to Disneyland. Bale agreed to meet with the family after learning that they had set up a Facebook page hoping to make Barber’s wish of meeting Batman come true.

“The entire interaction was like old friends having lunch. Jayden did not get star struck but was well aware of who we were with! They talked movies and superheroes and he (Bale) was genuinely happy to hear about everything Jayden wanted to tell him,” the young child’s mother, Charlene Gillingham Barber told.

“Christian, his wife and daughter are three of the most beautiful people we have ever met! Christian made these arrangements for us personally and ensured we were treated like royalty. I don’t have even one negative thing to say about them. I can tell you that they were just as impressed w (with) Jayden as Jayden was w (with) them,” she added.

Ian Ziering Take His Little Pumpkin To The Patch