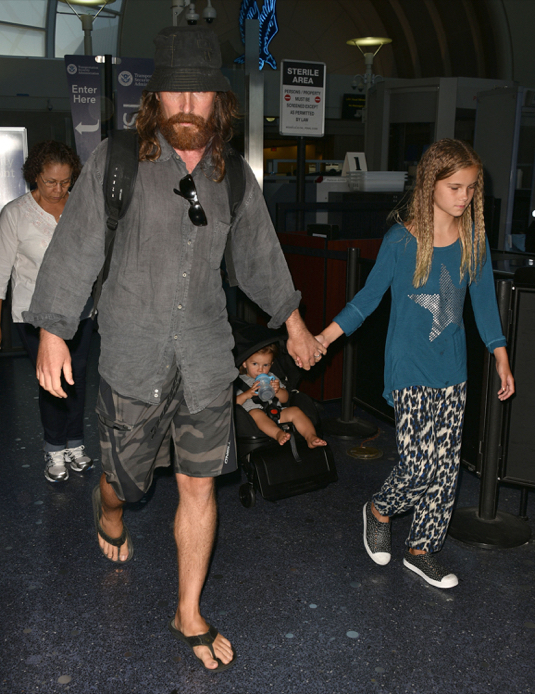 Christian Bale was photographed arriving on a flight with his wife Sibi and their children Emmeline & Joseph from Miami at LAX Airport in Los Angeles, CA on Monday (Aug. 17).
The Dark Night actor looked scruffy in big beard and long messy hair while he made his way through the terminal. Once outside, Bale graciously signed autographs for his waiting fans.
In the past, Bale has said it is great being a successful actor, but nothing compares to being a father.

“Think about how strange and unfortunate it would be for my daughter if I couldn’t just be a dad. You shouldn’t make your children suffer because of choices you make… I get no greater joy than when I’m looking at my daughter and her friends when they’re laughing their asses off,” he told GQ Australia in 2012. “Movies are great but when I look back, it’s the time with my family I’m going to remember. That’s the source of character.”

Bale can next be seen in Terrence Malick’s fantasy drama Knight of Cups. It is set for a March 4 release date.
Image Credit: Fame/Flynet
Continue Reading

Hilary & Haylie Duff Takes Their Kids to the Farmers Market