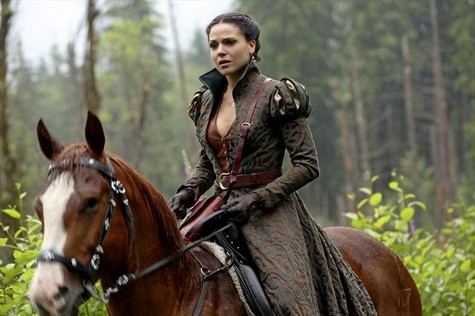 Last week was the season premiere of Once Upon A Time season 2 and reality and myth began to merge as the fairytale characters awaken from Evil Queen Regina’s broken curse and remembered who they were. Did you watch the premiere?  We did and we have a full and detailed recap here for you!

Tonight Once Upon A Time returns to ABC with a while new episode called “We Are Both.”  On tonight’s show Prince Charming runs onto the Town Hall front lawns desperately searching for Mother Superior (Blue Fairy), who is actually one of the fairies who helped send Emma through to Storybrooke via the magical tree. Prince Charming asks if there might be another one on the other side; she says it’s possible, but that she doesn’t know, and, without any fairy dust to guide them, there’s no way of knowing. Plan Find-a-Magical-Tree is clearly and quickly shot to hell. Geez, fairy-girl, why ya gotta be such a pessimist? Prince Charming is just trying to save the world and stuff!

Grumpy, one of the dwarves, comes storming in alongside all the other dwarves. Sneezy is by his side, and his Fairy Tale Character Dementia has returned. He can’t remember his Story Book character. He is lost again. Grumpy says that as soon as a character exits the town — crosses over the threshold that separates Storybrooke from the outside world — their memory is masked, just like it was when Emma first entered the scene at the start of last season. And guess what? Coming back through the threshold doesn’t fix it. Terrible news!

Meanwhile, in the fairytale land that was, as her wedding day to King Leopold approaches, Regina is confronted by a man of magic who promises to help her become independent and break free from her mother Cora’s (Barbara Hershey) clutches

ONCE UPON A TIME SEASON 2 EPISODE 2 “WE ARE BOTH” LIVE RECAP HERE!