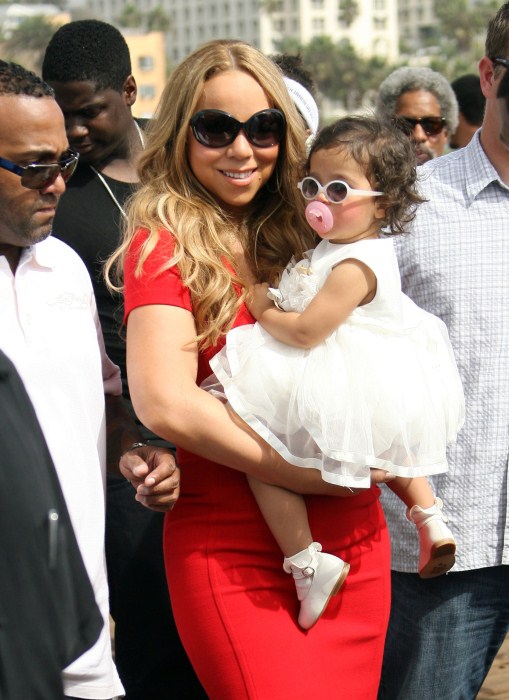 Mariah Carey, her husband Nick Cannon and their one-year-old twins Monroe and Moroccan attended “Family Day” at the Santa Monica Pier, Ca on Saturday. Carey was pictured carrying Monroe as the family were escorted by bodyguards to the amusement park. Monroe was dressed up in a white dress and fancy shoes. Moroccan was not pictured.

Once inside the park, Carey and Cannon got some alone time as they rode a roller coaster. Both looked to be having a ball as they screamed and waved their hands in the air.  The family also picked up cotton candy before they left the fair.

Carey recently accused Nick Minaj of threatening to shoot her after they had a argument on the set of American Idol.  The two singers who are currently judges on the hit show came to blows at auditions in Charlotte, NC that  started over a singer.

On The View, Barbara Walters recounted the story Carey had told her during a phone conversation:

“when Nicki walked off the set, multiple people heard Nicki say, ‘If I had a gun I would shoot the (adjective unspoken by Walters) bitch.'”

After a meeting on Wednesday attended by the pair, Minaj said to Carey, “I love you, but we might fight again,” according to Walters. “Mariah responded, ‘No, we will not.'”

Walters said Carey told her that the singer had hired extra security.

“Mariah said she doesn’t feel comfortable emotionally,” Walters reported. “But she will continue with the show because she loves the show. And she loves mentoring the contestants.”

What do you think of the feud?