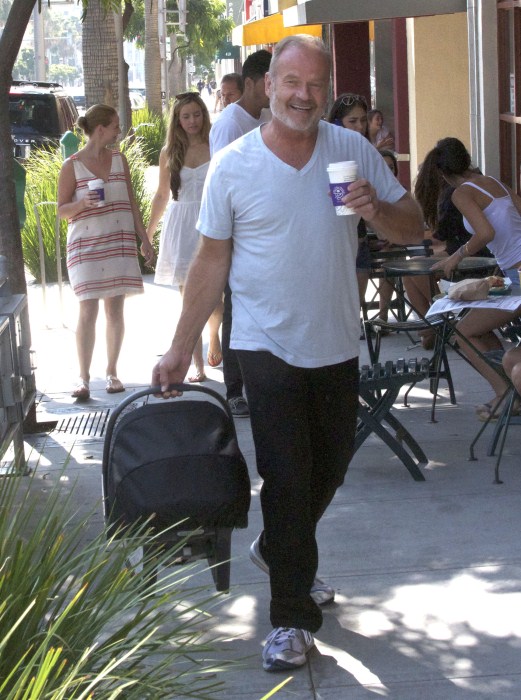 Kelsey Grammer was spotted making a coffee run with his wife Kayte Walsh and their daughter Faith in Beverly Hills, California on Sunday. The actor left the Coffee Bean And Tea Leaf looking casual in black jeans, a white shirt and runners as he carried Faith in a car seat in one hand and coffee in the other. Walsh followed behind as she talked to a friend.

The former Fraser star whose divorce from former wife Camille finalized last week admitted they didn’t have sex for 10-years.

Responding to rumors he and Kayte had slept together on the night they met, Kelsey told talk show host Conan O’Brien:

“Well we kissed that night. We didn’t do anything much more than kiss for several months.

“I just wanted to clear that up … she was worth the wait.

When Conan remarked, “I would think that would be difficult,” Kelsey said: “Well, for a guy that hadn’t had sex for a decade it wasn’t that hard!”

I wonder how Camille got pregnant with Jude if they didn’t have sex for 10-years? Hmmm!