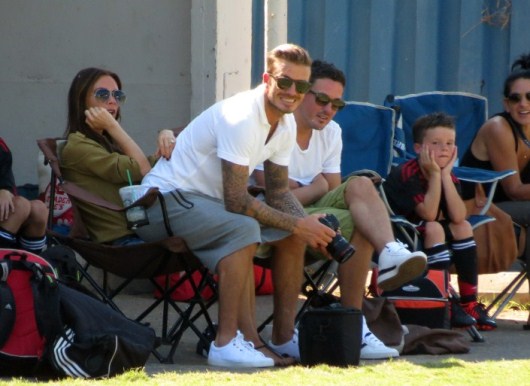 Move on over soccer mom’s because there is a soccer dad in town by the name of David Beckham!

David looked like the happiest dad in the world while spending a day watching his sons Brooklyn and Romeo play in a game of soccer on Sunday.  The Los Angeles Galaxy soccer star resembled a professional photographer on the sidelines as he enthusiastically snapped photos of his boys running around.

He was joined by wife Victoria who traded in her high heels and trademark black attire for cut-off jean shorts, a brown blouse and sandals. She sat on a chair while cheering on the sidelines. At one point, David took a break from being a crazy soccer dad and sat on Victoria who then affectionately gave him a big hug!

David and Victoria are apparently planning to renew their wedding vows with an ultra-special blessing.

“They’re talking about doing ‘something special’ with friends and family. They’ve endured a lot over the years and both agree it would be a lovely thing for the kids to be a part of. Victoria’s on a real high at the moment,” a source told Closer magazine.

“She’s calling it a ‘blessing with vows’ and the plan could be to go back to Ireland where they wed and also do something on their LA estate. They’re thinking mid-October, possibly with the same reverend who married them and christened Brooklyn and Romeo.”

Last month, the couple’s relationship was put under the spotlight after David was falsely accused of having an affair with Welsh opera singer Katherine Jenkins. Fortunately, the rumors didn’t make Victoria have second thoughts about renewing their vows.

“She can’t wait to renew their vows and doesn’t care if it might look like odd timing after the affair rumors – she says they’ve got nothing to hide and she doesn’t care what anyone thinks, anyway… Her success has been a real boost to her self-confidence.”