Teen Mom Jenelle Evans’ Secret Adoption Plans, She is Giving Up Her Son! 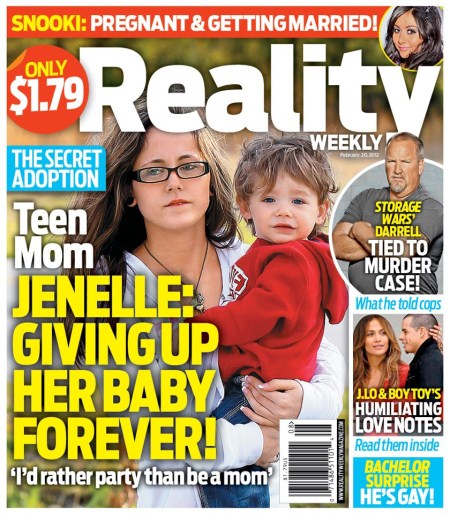 Reality Weekly magazine claims that Teen Mom Jenelle Evans has planned a secret adoption.  Jenelle has made the choice she rather party than be a mom!  Jenelle has already signed custody of her 2-year-old son, Jace over to her Mom Barbara Evans and she would really like her to make it permanent and adopt him.  Jenelle just does not want the responsibility of raising a  young child anymore.

Reality Weekly has more: In the year since she signed over custody of her son, Jace, to her mother, Barbara, Jenelle Evans has done virtually nothing to get him back. She’s even looking for new ways to get out of what little responsibility she does have toward her 2-year-old son, by urging Barbara to secretly adopt him.

The 20-year-old Teen Mom 2 star is chronically short on money, so the $30-a-week child support she is forced to give Barbara is a burden. And although she claims she loves the toddler, she frequently misses showing up for her scheduled visitations — and is ready to give the baby up. “She has told her friends that she knows it means giving up Jace forever, but she genuinely thinks she’s doing the right thing,” says an insider.

Considering all the trouble Jenelle has been up to it’s clear she is not ready to be a mother.   Jenelle was arrested twice in one week in January for allegedly making harassing phone calls and threatening her ex-roommate.  Add to this Jenelle’s still on probation for beating up a girl in a fight last year and it is clear she needs to do some growing up before she can be responsible for Jace.  He is much better off with her mother.  What do you think?  Sound out in the comments below and let us know!

Channing Tatum & Wife To Have Kids In The Future

Jennifer Aniston Gets Ready For Her Twins (Photo)