Jennifer Aniston Gets Ready For Her Twins (Photo) 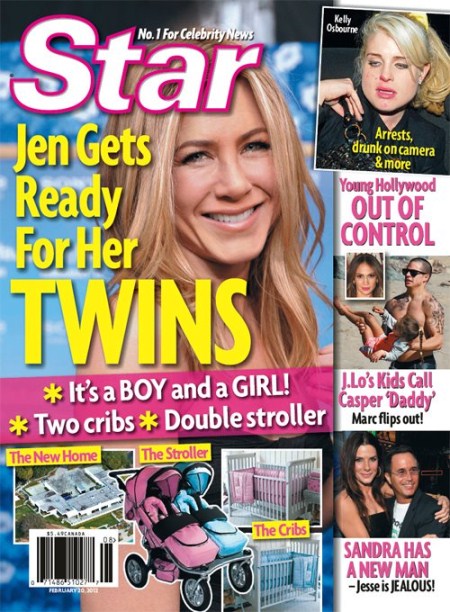 The current issue of Star Magazine features the cover story ‘Jen gets ready for her twins- a boy and a girl.’ The magazine claims that Jennifer Aniston is getting ready for twins – pregnant or adopting who knoews?  Apparently Jen’s twins will not be identical since it is known by Star that there is one of each sex. The cover shows lovely his and hers cribs and a pink and blue double stroller for those family walks. Will Jen and Justin go over the top like Beyonce and Jay-Z did with The Notorious B.I.C. – Blue Ivy Carter? Hopefully not.

The cover’s pictorial suggestion is that Jen’s purchase of her massive Cali mansion – a veritable estate – is a part her nesting. What will the twins’ names be? I doubt there will be a Brad or Angelina in there.

Problem is that if we accepted all the tabloids’ predictions regarding Jennifer and twins we’d already be calling her Octomom. But it is certainly possible that Jen is pregnant and with twins.

The September 5th, 2011 cover of Life & Style Magazine featured Jennifer with claims of a world exclusive and blazoned across the cover ‘Fertility Doctor Gives Jen The good News – It’s Twins, Her Bump gets bigger!’ At that time Jennifer had found herself a new man in Justin so rumors of her getting married and being pregnant were circulating.

Back in December it was Star Magazine featuring a cover story ‘Jen: I’m Pregnant – With Twins.’ The magazine claimed that after months of fertility treatments Jennifer’s dream of becoming a mother had come true.

Is Jen finally pregnant? I she having twins? What do you think? Sound off in the comments below.

Teen Mom Jenelle Evans’ Secret Adoption Plans, She is Giving Up Her Son!