Exclusive Baby Announcement: Kourtney Kardashian Is Having A Girl (Photo) 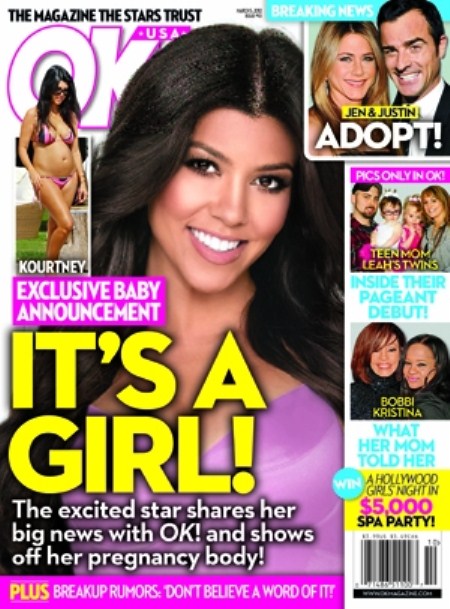 From the OK Mag cover:  Exclusive Baby Announcement! Kourtney Kardashian is having a girl!  The new bundle of joy will join Kourt’s growing family with boyfriend Scott Disick and son Mason!  The excited star shares her big news with OK! and shows off her pregnancy body.  Plus! Breakup rumors: “Don’t believe a word of it!”

We are sure aunts Kim Kardashian, Khloe Kardashian Odom, Kendall and Kylie Jenner, and uncle Rob Kardashian can’t wait to spoil this little baby. And don’t forget about grandparents Bruce and Kris Jenner!

But all that glitters might not be gold since Scott is up to his old tricks partying and flirting – basically behaving like a single stud, not like a man about to be a father of two.  OK! is claiming that the breakup rumors are not true.

To find out more pick up the current issue of OK! Magazine!

WHERE IN THE WORLD IS THE GO TO FAMILY?

We’ve been traveling for