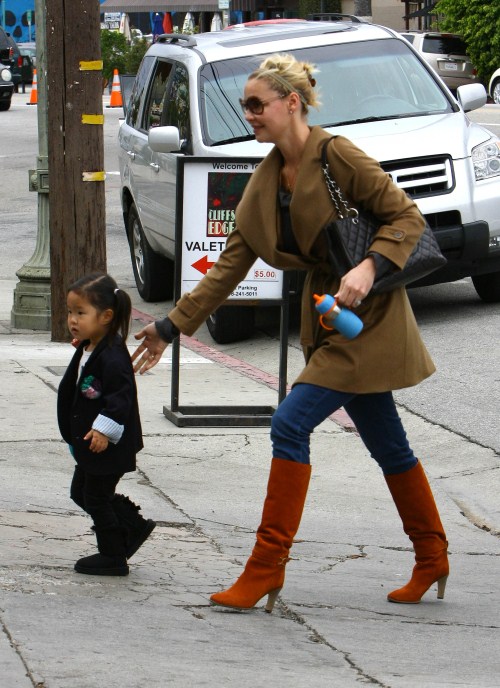 Katherine Heigl has announced that she almost lost it due to not being able to cope with all the different facets of being a full time mom and full time actress all at the same time.

“I could not have known when I was 10 years old holding other women’s children and playing the greatest game of make-believe on Earth that I would one day have to reconcile my two great loves,” she said “I didn’t realize that having it all would not look and feel as I imagined.”

The Knocked Up actress revealed that she suffered high-stress and anxiety because of her daughter, and this stress was not only affecting her professional life but even her personal life with her husband:

“No matter how great my intentions, how lofty my goals, how passionate my commitment, I was failing. I was failing my work, I was failing my daughter, I was failing my husband. I was stressed out and exhausted. I was worried and afraid it was all slipping through my fingers no matter how tight my grip.” She admitted.”I couldn’t enjoy the work because I was so distracted by the little being in my trailer waiting for me. I couldn’t help but wonder what I had gotten myself into and if the choice I made to be a working mother was the most selfish decision of my life.”

The actress then admitted that she was constantly “beating herself up” over the decision she made to be a working mother, and that it was very difficult emotionally to deal with.

“I began to understand that the blessing and the curse were one in the same, that nothing great comes without a price,” she realizes “Now when I take a job, I look my daughter in the eye, screw up my courage and try to explain to her that Mommy has to go to work… [that] work makes me a better person, a better woman, a better mother.” She explains. “Then I pray to God that she will understand one day and that my example will encourage her to find and follow her bliss as well… after I’ve paid for all the therapy, of course.”

It’s uncertain whether she realizes it or not, but asking these types of questions is what makes you a good mother(or parent in general). It shows that you care. I think lots of working mothers(and daddy’s) can relate to such emotions, as they seem to be quite normal when a parent is forced to juggle 2, or even 3 full time jobs(yes, being a parent IS a full time job – could even be the hardest full time job of all).

The actress has been married to singer Josh Kelley since December 23, 2007. In September 2009, the couple adopted a daughter, Nancy Leigh “Naleigh” Kelley (born November 23, 2008), from South Korea.