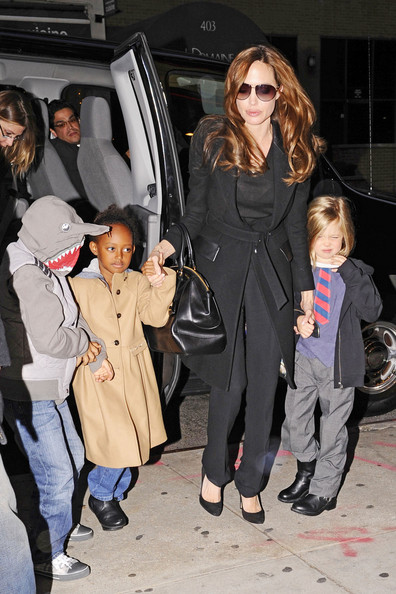 Take note people, Angelina  Jolie does not lecture her kids! Why would a parent not lecture her kids, ever? Well it seems that Angelina Jolie is trying not to impose a certain world view onto her children, but is instead trying to help them develop their own through telling them about where she goes and what she does, and by bringing the kids back to their native countries and never allowing to forget about where they come from. Jolie said, while at the Palm Springs Film Festival(where her partner was awarded an achievement award) last Saturday, January 7th:

“I’m not one of those moms who kind of lectures [my kids],” Jolie said.  “But I do tell them, whenever I go on a trip, where I’m going and why. And on some occasions, they’ve come with me to different refugee camps. And they also go to their home countries a lot.” Jolie added.

“Hopefully they live in the world, and they see the world really as it is, outside of Hollywood,” she continued. “If they really live in the world and spend time with friends around the world from all different types of backgrounds, they [will] just see things as they are.”

In essence, she wants her kids to be children of the world, and she doesn’t want them to get caught up in all of the Hollywood hoopla when they get older. Hard to argue against those intentions, but it’s still a question worth asking: Is she right in her approach of choosing not lecture her kids?