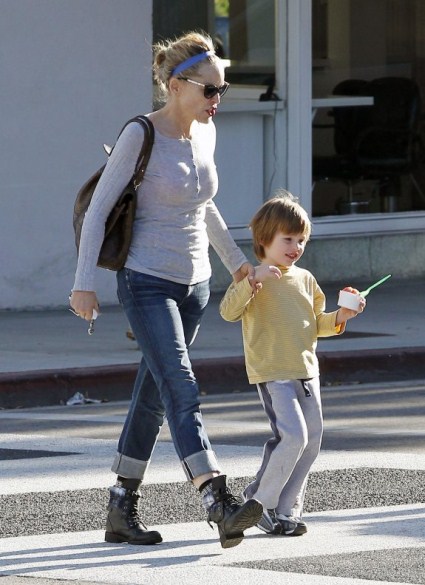 There was a time when you couldn’t head to the cinema without seeing Sharon Stone on the big screen or walking a red carpet. These days the  53 year old’s first priority is motherhood. She still makes movies – but only when she can fit it in around her boys schedule. So it was no surprise to see the Basic Instinct star out and about yesterday with her youngest son Quinn Stone.

Four year old Quinn must have been a good boy because he was enjoying a treat when the pair were spotted in California. Quinn has two older brothers – 11 year old Roan Stone and 6 year old Laird Stone. But on Monday he enjoyed some one on one time with his famous Mom.

The actress remains in great shape. She was wearing tight denim jeans, a long sleeve top and a pair of chunky black combat boots! It was a bit mix and match given the blue headband she was sporting! Quinn had his sweats on.

So what has Miss Stone been up to lately when she’s not taking the kids to school, helping with homework or watching them play sport? There was a TV gig a couple of years back. She played Jo Marlowe on Law &  Order : Special Victims Unit. When it comes to the big screen – she recently completed filming Gods Behaving Badly. We should see it by the end of the year. Then there’s Lovelace – the Linda Lovelace biopic which is shooting now. She’s playing Dorothy Boreman.

Sharon Stone Does Some Parisian Shopping With Roan