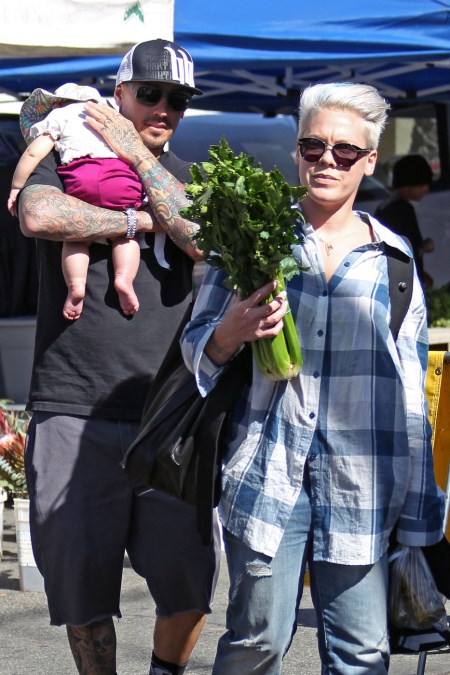 Pink and Carey Hart recently celebrated their wedding anniversary. So did they hit the clubs? Fly to Vegas? Have a romantic dinner for two? No. They decided to mark the happy occasion with a family bike ride at Santa Monica and stroll along the Venice Beach Pier in California.

The couple were beaming as they soaked up the sunshine with seven month old daughter Willow Sage Hart. It was a casual day out for the trio. The singer – who voiced a character in the recent movie Happy Feet 2 – was rocking a red chequered shirt, black cargo pants and flats. Finished off with a grey beanie! But her best accessory was the baby carrier housing her little girl. Pink even had a special place for her precious cargo when she jumped on her red bike. She towed Willow’s buggy along behind. Carey then rode behind the pair to make sure his girls were safe at all times.

It was kind of apt the rocker and Motocross rider spent their anniversary by the water. They actually said ‘I do’ on the beach in Costa Rica in 2006. Some quick math and that tells you this is anniversary number six! It was a fairly intimate wedding with just 140 people sharing their special day.

It hasn’t all been plain sailing and happy families. The two separated in 2008. But they realised they were meant to be together and reconciled in early 2010. Awww. Then last year came the news Pink was expecting. So now – here we are in 2012 – and they’re enjoying every minute of married life and parenthood.

Mark Wahlberg: Being A Father Is “The Most Important Role That I’ll Ever Play”