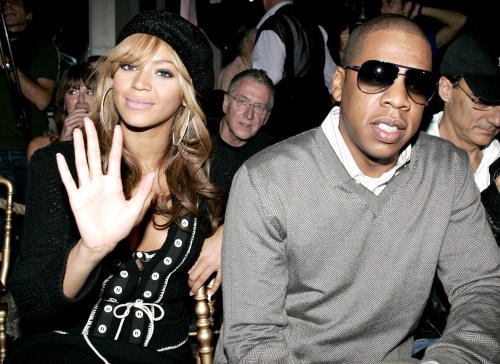 Jay-Z made his first public appearance since his wife gave birth to already mega famous baby Blue Ivy at night club 40/40, which he happens to own. This was also the relaunch of the night spot, so it was a double whammy event for the 42 year old rapper who sources claim partied like a ‘pro’. 350 Armand de Brignac champagne bottles were made into the form of a tower, the rapper then lying on this tower of alcoholic goodness… but that’s not all, as Jay-Z was made into the cherry on top of this cake, but he was topped with a symbolic stork.

“All that preparation must have been thirsty work – judging from the champagne tower Jay laid on. Nothing like that has ever been created before.’ said a source at the party. Maybe we should call Myth Busters to see how this feat was made possible.

“It was a bit OTT but he’s mad about his daughter. There’s nothing he wouldn’t do for her. You’d expect nothing less from the richest man in rap.” Added the source. There’s something odd here, I don’t exactly know what Jay-Z “did” for Blue Ivy by lying on a tower of alcohol…. but maybe I don’t see the bigger picture here.

This was a veritable vip party, with names such as Alex Rodriguez, Alicia Keys, Swizz Beatz, and Ashanti amongst others  being on the listof people invited to the party. According to Global Mirror contact “No wonder security was tight. A lot of money has been pumped into Jay’s club, with state of the art 165in video screens, and they weren’t about to take any risks with gate-crashers.”

“Security was phenomenal, with guests being frisked at the door and people going through metal detectors to make sure no weapons were brought in for the club’s grand re-opening.”

It’s great that Jay-Z finally made a public appearance, and it’s also great that he reopened his club in style, but the most important question still hasn’t been answered: Where are pictures of Blue Ivy and when will we get to finally meet her?

Jennifer Garner Not Giving Birth Till The Spring