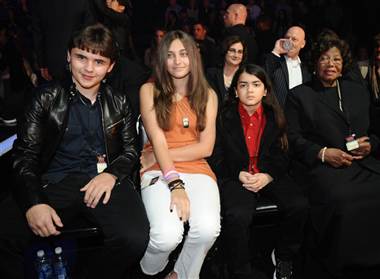 Prince Michael, 14, Paris, 13, and nine-year-old Blanket, joined their grandmother Katherine and uncles Jackie, Tito and Marlon as the TV show paid tribute to their late father, with all the contestants singing some of his biggest hits.

Prince told host Steve Jones: “We’re very excited to be here.” His sister Paris added: “Everyone was fantastic. I love this show very much.”

Meanwhile, Katherine was reduced to tears by 19-year-old Melanie Amaro’s rendition of ‘Earth Song’ and later revealed the programme is her “favourite show”.  She added: “I don’t miss an episode of this show. I am so very excited to be here.”

Marlon hailed the evening a “special night” and thanked ‘X Factor’ chiefs for basing the episode around his sibling, who died of acute Propofol intoxication in June 2009.

He said: “This is a special night. We want to thank ‘The X Factor’ for putting on this special tribute on behalf of our family.’

A Few of My Favorite Things, Mom Edition!

Simon Cowell: “I Love The Fact That I’m Having This Baby!”