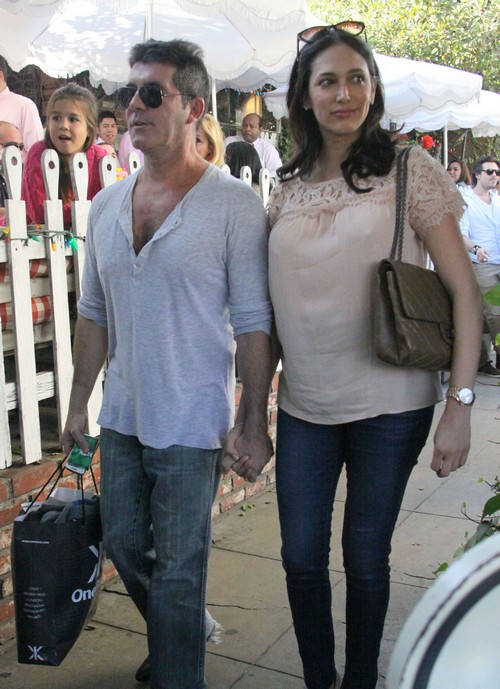 The X Factor USA judge Simon Cowell and his baby Mama Lauren Silverman enjoyed  a lunch date yesterday at the Ivy in LA to celebrate his 54th birthday. [October 12th, 2013]  Since The Ivy is one of LA’s places to go to be seen the couple definitely wanted to be seen and chose an appropriate “look at me” table.

Lauren looked thrilled to be with Simon and wore skinny jeans and a pale pink top adorned with lace.  She teamed the outfit with pointy toed heels which she later removed.  Simon gave Lauren a kiss during the lunch but Lauren looked more into the kiss than Simon who seemed a bit uninterested.  Later the two headed out to do some fruit shopping at Whole Foods Market just like a normal couple.

Meanwhile people are wondering whether Simon will finally tie the knot.  He told Us Magazine, “Obviously, I would never expect to bring a baby up without a proper father.”  When Lauren was asked if the two would marry she responded, “You’d have to ask him.”  Clearly Lauren would not say no.

You never know word on the street is Simon is getting Lauren to meet his mother and that is certainly serious. ”He wants her approval, and for Lauren and Julie to become close. It means everything to him that the two most important women in his life form a good bond.’  Simon’s playing his cards close to his chest, but it’s clear he has deep feelings for Lauren. Marriage isn’t such an off-limits idea and Simon’s mum would want that for him.”

So what do you think CBLers, are we soon to see X Factor judge Simon Cowell walk down the aisle with Lauren Silverman?  Let us know your thoughts.