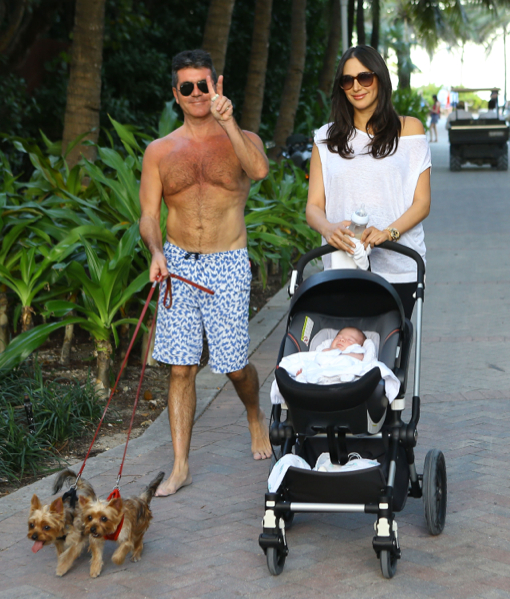 Simon Cowell and his girlfriend Lauren Silverman enjoyed a relaxing stroll with their baby boy Eric and family dogs in Miami, FL on Tuesday (March 4).

The X Factor judge was all smiles while he strolled shirtless with their two Yorkshire dogs on the boardwalk. Silverman was dressed casually in a white shirt and black tights as she pushed a stroller with the newborn inside.

Many news outlets have accused Cowell of parading the newborn baby just days after his around Miami beach for publicity.

“I just want people to be clear that, yes, he has gone on a plane very early on, but the paediatrician in New York cleared him to travel,” he told the Daily Mail. “We would not have done it otherwise. We would never dream of putting him at any risk.”

“I know that there will be photos where Eric looks like he is in the sun, or photos where he looks like there’s a dog in his face, or it looks like we aren’t being great parents — but that isn’t the case. We are taking great care of him all the time.”

The music mogul is reportedly planning to jet his family from the US to the UK in the coming days so that his mother, Julie, and relatives can meet the newborn.