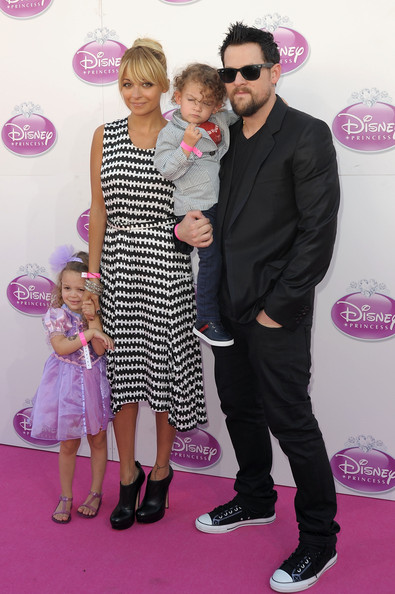 Nicole Richie and husband Joel Madden took their children Harlow and Sparrow  to the official inducting of Rupunzel into the Disney Princess Court event.  The event was held  at Kensington Palace on Sunday in London, England. Richie and Madden matched in black outfits while Harlow was dressed up as Rapunzel. Unfortunately, Sparrow was not dressed up as a Prince 🙁

The event follows last year’s movie Tangled, which tells the Rapunzel story.  Tangled is one of the top ten grossing Disney movies of all time, ahead of Toy Story, Beauty and the Beast and Cars. Rapunzel joined the other nine Disney princesses: Snow White, Cinderella, Aurora, Belle,  Ariel, Pochahontas, Jasmine, Mulan and Tiana.” The 10 princesses paraded down the London streets in horse-drawn carriages to the palace. It was followed by a royal ceremony where Rapunzel received her crown.

“From now on Rapunzel will be included in all Disney Princess products featuring multiple characters, in addition to her own merchandise line. Plus, across all Disney Parks, Rapunzel will for the first time wear her royal tiara, stolen from the kingdom by Flynn Rider in the Tangled film,” said Mary Beech, vice president of girls franchise development and marketing at Disney Consumer Products.