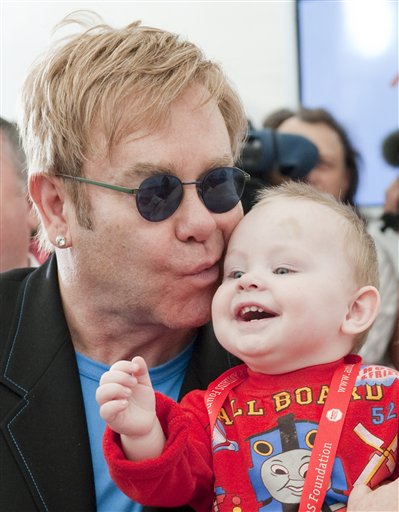 Elton John’s son, Zachary makes him happy. He often finds himself thinking of Zachery when they are not together.

“When I’m singing at night, I sometimes think of him during a set and burst out laughing. He’s a great antidote to feeling miserable. Every single second he’s just adorable,” Elton said.

“He just makes me smile so much. He’s just a gorgeous little boy.”

Elton, says he realizes he had children late in life, but doesn’t feel like it is a hindrance.  Rather, it is the “icing on the cake” because he has already experienced so much.

“My life has been quite remarkable, some of the things that have happened to me I never dreamed would happen to me ever. So this is the icing on the cake!” he said.

“He’s six months, he’s had his first solid food. It goes so quickly.”