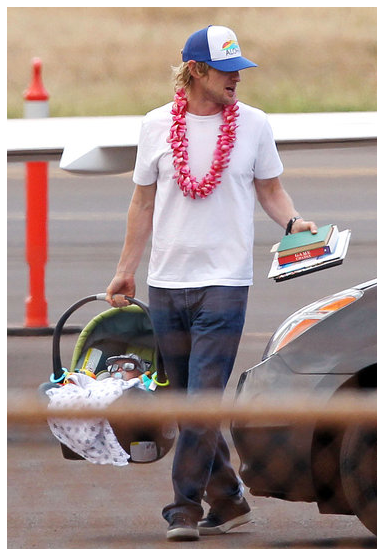 Owen Wilson and his girlfriend of one  year, Jade Duell, welcomed their son’s birth back in January. The baby boy, Robert Ford, was born in Hawaii and is Wilson’s first child. Owen opened up with Parents magazine about being a father for the first time and what impact it has. According to him, diaper changing is an easy task.

“Changing a flat tire is much harder. I thought changing diapers was going to be challenging, but from the first day, I jumped right into it. I have my whole system down and I’m able to just knock it out. I sort of surprised myself by being a fairly adept dad.”

Owen Wilson’s voice will be used in the new Disneyland attraction ‘Cars‘. He thinks that this will be pretty cool for his son when he is old enough to visit the theme park and hear his dad’s voice.

“I was thinking about how that’s the place you want to go to the most as a child, and the idea that my voice will be in this park is sort of incredible.  One day I’ll take my kid there and to be a part of that ride will make me feel kind of proud,” Wilson told the magazine.

Even though few people know it, Robert will have his own little role on the big screen soon enough, thanks to his actor-father’s work in the movie Cars 2. Wilson said, “On this one, I had just become a father and they do this thing called ‘production babies’. At the end of the movie, they list the babies who were born to Pixar people during the course of filming it. So, our little baby will have his little credit up there on the screen too.”

Pretty cool! Congratulations to Owen, Jade, and good luck to them both as they raise baby Robert!